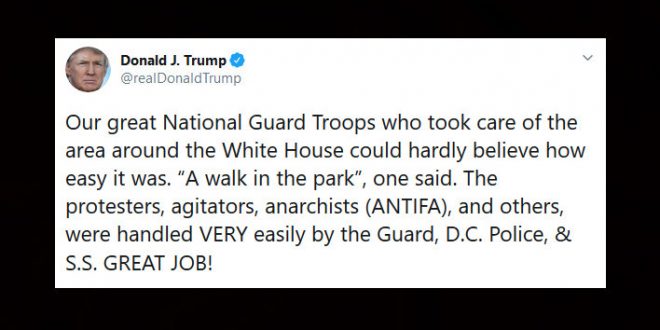 Trump: My SS Did A Great Job On Those DC Protesters

So, this is notable. He’s using “SS” for Secret Service. Again. He’s using the term “SS.” He is referring to the tear-gassing of protesters outside the White House, to clear the way for a photo-op at a church. So, the SS easily handled the anti-fascists. Well there you go.

Our great National Guard Troops who took care of the area around the White House could hardly believe how easy it was. “A walk in the park”, one said. The protesters, agitators, anarchists (ANTIFA), and others, were handled VERY easily by the Guard, D.C. Police, & S.S. GREAT JOB!

Wow. Trump just tweeted that the peaceful protestors around the White House were handled very easily by the S.S. The S.S., otherwise known as the Schutzstaffel, was Adolf Hitler’s paramilitary group of the Nazi Party. It was led by Heinrich Himmler and was pure fucking evil.

Some also described it as a “walk through peaceful protesters”

thank you, donald trump, for reminding americans why the secret service is abbreviated “USSS” and not “SS”

Trump shortening Secret Service to SS while threatening to round up Americans is a bit on the nose. https://t.co/XrWZ5eN3fs

Trump lionizing the SS for gassing Americans. We all knew this day was coming https://t.co/vU72xsR3OG