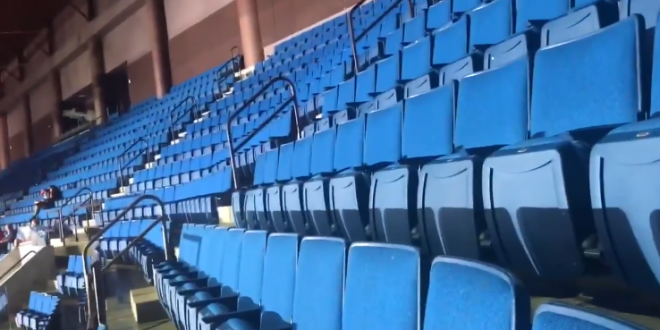 By the time President Donald Trump was gliding in his helicopter toward Joint Base Andrews on Saturday, destined for what he’d once hoped would be a triumphant packed-to-the-rafters return to the campaign trail, things were already looking bad. Things did not improve once Air Force One lifted off. The President received a report that only about 25 people were assembled in the overflow space the campaign had reserved for a crowd Trump claimed five days earlier would top 40,000.

Two hours before the rally was set to begin, people who had signed up for tickets received an urgent text message from the Trump campaign: “The Great American Comeback Celebration’s almost here!” it read. “There’s still space!” While he was in the air, the campaign had canceled the outside appearance given the apparent lack of enthusiasm. Aides were anxiously awaiting his response to a less-than-stellar turnout, aware he has threatened to fire officials in the past when his rallies ended in disappointment.

Trump tried to explain away the crowd size by blaming the media for scaring people and by insisting there were protesters outside who were “doing bad things.” But the small crowds of pre-rally demonstrators were largely peaceful, and Tulsa police reported just one arrest Saturday afternoon.

Before the rally, Trump’s campaign revealed that six staff members who were helping set up for the event had tested positive for the coronavirus. Campaign communications director Tim Murtaugh said neither the affected staffers nor anyone who was in immediate contact with them would attend the event.

The president raged to aides that the staffers’ positive cases had been made public, according to two White House and campaign officials who spoke on condition of anonymity because they weren’t authorized to speak publicly about private conversations.

TikTok users and fans of Korean pop music groups claimed to have registered potentially hundreds of thousands of tickets for Trump’s campaign rally as a prank. After @TeamTrump tweeted asking supporters to register for free tickets using their phones on June 11, K-pop fan accounts began sharing the information with followers, encouraging them to register for the rally — and then not show.

“It spread mostly through Alt TikTok — we kept it on the quiet side where people do pranks and a lot of activism,” said the YouTuber Elijah Daniel, 26, who participated in the campaign. “K-pop Twitter and Alt TikTok have a good alliance where they spread information amongst each other very quickly. They all know the algorithms and how they can boost videos to get where they want.”

Many users deleted their posts after 24 to 48 hours in order to conceal their plan and keep it from spreading into the mainstream internet. “The majority of people who made them deleted them after the first day because we didn’t want the Trump campaign to catch wind,” Mr. Daniel said. “These kids are smart and they thought of everything.”

Talking up the rally last week, Trump said nearly a million people had requested tickets to attend. “We have a 22,000-seat arena, but I think we’re going to also take the convention hall next door, and that’s going to hold 40,000 … We expect to have a record-setting crowd. We’ve never had an empty seat, and we certainly won’t in Oklahoma.”

But they did have empty seats. Approximately 13,000 of them, according to the Tulsa Fire Marshal, who counted slightly less than 6,200 attendees at the 19,000-seat Bank of Oklahoma Arena on Saturday night.

Shortly before Trump took the stage, construction crews dismantled the outdoor “overflow” space near the arena, after it was clear there wouldn’t be enough people to fill it.

To be clear, any Trump supporter who wanted to attend last night would have been able to easily get inside. The TikTok troll didn’t cause anybody to be denied entrance, which was on a first come, first served basis. But what those kids did do was give the Trump campaign the false impression that an utterly massive crowd would be on hand.

Teenage girls booking out all the tickets for #Trump’s #SpinalTap comeback rally and leaving his rancid bile echoing round an empty stadium will be the most fun thing taught in history class for millennia.#genius

“Donald Trump went to Tulsa to fill a hole in his heart. To hear people cheer for him. To complain about those who have insulted him…He knew this was a place where he would be loved by a sea of ‘his people.’ And he didn’t even get that.” https://t.co/D0mRNgFKQw

Shout out to Zoomers. Y’all make me so proud. ☺️ https://t.co/jGrp5bSZ9T

I had two tickets to tonight’s rally.

They were reserved in the name of Joan Quigley.

She was Nancy Reagan’s personal astrologer.

Unfortunately, Joan and I were unable to attend.

Joan, because she’s dead. Me, because LOL.

He would have gotten away with it if hadn’t been for those meddling kids #tiktokteens pic.twitter.com/QlZMB11HJQ

Wait, kids on TikTok reserved the empty seats at Trumps rally?
The President was publicly trolled by our children. Have an extra drink tonight parents, you’ve done well.

This is what happened tonight. I’m dead serious when I say this. The teens of America have struck a savage blow against @realDonaldTrump. All across America teens ordered tickets to this event. The fools on the campaign bragged about a million tickets. lol. @ProjectLincoln.

Previous CHATTER AWAY: Overnight Open Thread
Next Trump: When You Test More People You Find More Cases So I Ordered Testing To Be Slowed Down [VIDEO]