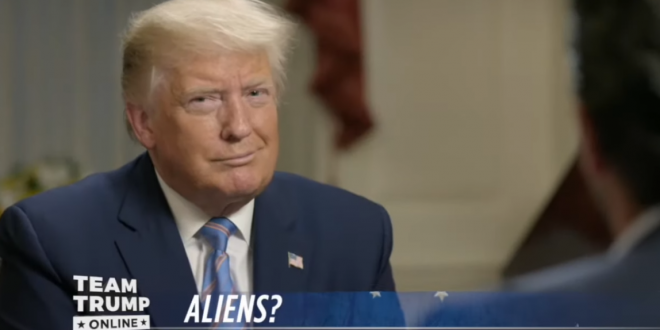 President Donald Trump says he’s heard some interesting things about Roswell, but he’s not sharing even with his eldest child. Trump made the comments Thursday in a Father’s Day-themed interview with his son Don Trump Jr., hosted by the president’s reelection campaign.

Don Jr. wound down his interview by jokingly asking his Dad/President if he would ever divulge more information about Roswell, the New Mexico city known for its proximity to arguably most famous UFO event — “and let us know what’s really going on.”

Trump responded, “I won’t talk to you about what I know about it, but it’s very interesting.” When asked if he would declassify the information he’s referring to, Trump said: “Well, I’ll have to think about that one.”

Donald Trump Jr.: “Will you let us know if there’s aliens? … Will you ever open up Roswell?”

President Trump: “So many people ask me that question.” pic.twitter.com/9PpHrjfVub