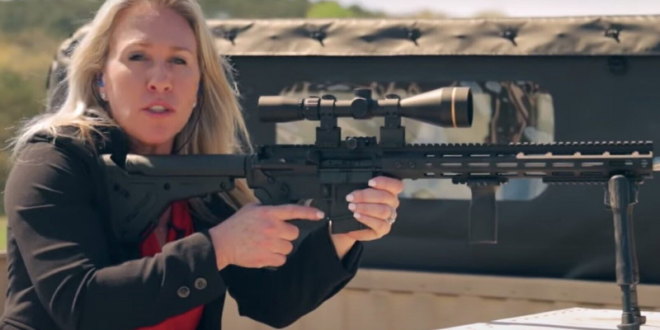 According to Media Matters, a progressive watchdog group that monitors conservative media, there are 51 candidates running for Congress who have promoted the messages of “Q” — a mysterious internet figure who drops digital “crumbs” about a secret war Trump is waging against a cabal of pedophile political elites in Washington. And on Tuesday, seven of them emerged in congressional Republican primaries. One of them, Marjorie Taylor Greene of Georgia, is favored to eventually end up in Congress.

The loosely connected cohort that follows Q, known as QAnon, exists in a symbiotic relationship with the president, and sees Trump as an almost messianic figure. Q has prophesied an upcoming event dubbed “The Storm,” when Trump will reveal the mass arrest — and potentially even the mass execution — of the Washington figures. Meanwhile, Trump has flirted right back, inviting one of QAnon’s top promoters to pose with him in the Oval Office, and retweeting over 130 tweets that directly reference QAnon-related claims.

US President Donald Trump boosted a Georgia Republican candidate who refuses to disavow a white supremacist she posed with in a photograph and has seemingly promoted anti-Semitic conspiracy theories.

“A big winner,” Trump wrote in a tweet Friday attached to a story on a pro-Trump website noting Marjorie Taylor Greene performed well in the primary for the heavily Republican 14th District, despite having an ad banned by Facebook. “Congratulations!”

Greene has posed in photos with Chester Doles, a Georgia man who once was a leader of the Ku Klux Klan and served a prison sentence for nearly beating to death a black man he saw in the company of a white woman. She has dismissed media queries about the photos as “silly” and “fake news.”

Previous TULSA: Record Spike In Cases Ahead Of Trump Rally
Next Texas Gov Downplays Continuing Record COVID Spike Because “We Have So Many Hospital Beds Available”