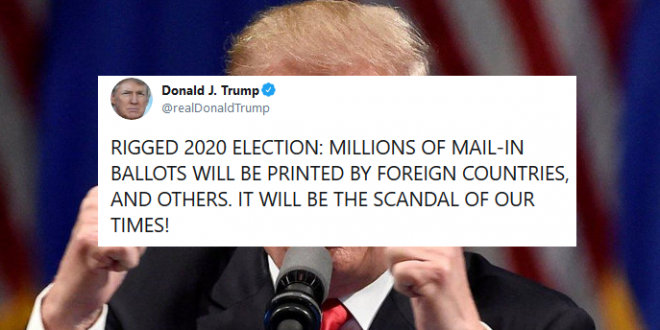 President Trump is coming off a weekend that featured a poorly attended political rally in Tulsa and is currently trailing by double digits in a number of national polls to the presumptive Democratic nominee Joe Biden.

RIGGED 2020 ELECTION: MILLIONS OF MAIL-IN BALLOTS WILL BE PRINTED BY FOREIGN COUNTRIES, AND OTHERS. IT WILL BE THE SCANDAL OF OUR TIMES!

show your evidence, or else you’re just a whiny loser. just like your father said

show your evidence, or else you’re just a whiny loser. just like your father said

4D Chess: Trump continues to persuade his base not to vote in November. https://t.co/iZHVpliBvd

Previous NASCAR Says Noose Found In Garage Of Black Driver
Next Trump Lawyer: “Thousands” Were Turned Away At Rally