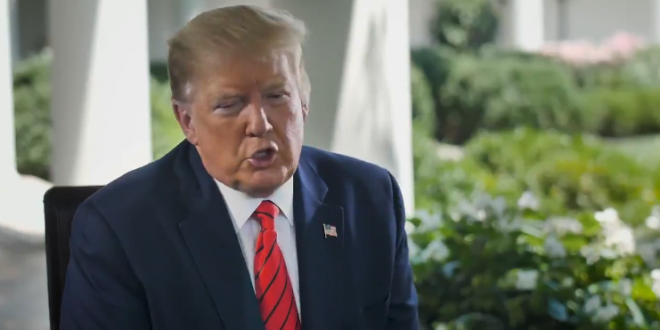 President Trump on Monday suggested without evidence that his predecessor, Barack Obama, committed treason in connection with the investigation into the 2016 Trump campaign’s contacts with Russia.

“Treason, treason. It’s treason,” Trump said in an interview with CBN News. The president did not elaborate on the specific charge but repeated his assertion that the previous administration “spied” on his campaign in the course of the Russia probe.

“They’d been spying on my campaign,” Trump told CBN News’ David Brody. “Turned out I was right. Let’s see what happens to them now.”

Re-upping this tweet from this morning in light of Trump just now accusing President Obama of “treason.” The accusation of treason lays the groundwork for Trump breaking all manner of laws, rules, and norms to get re-elected; if your opponents are traitors, it’s no holds barred. https://t.co/h9nsP7drdN

EXCLUSIVE: President Trump on what crime President Obama would have been potentially committing regarding the previous administration spying on his campaign: “Treason. It’s treason.” Watch the explosive clip from my White House interview with @realDonaldTrump @POTUS @WhiteHouse pic.twitter.com/IFui3fNigS

Previous VIRAL VIDEO: Trump Cultist Tells BLM Protesters She Will “Teach My Grandkids To Hate You All, KKK Belief”
Next CHATTER AWAY: Overnight Open Thread