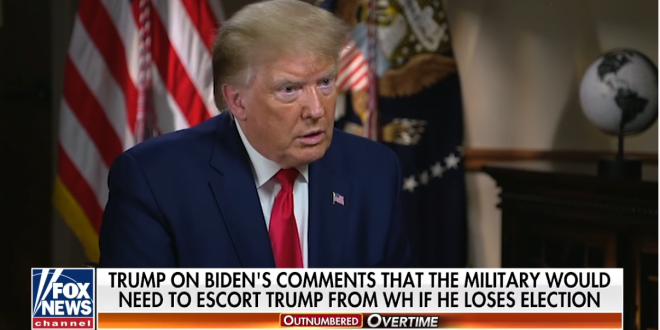 President Donald Trump sought to brush aside fears he might not leave office willingly if November’s election doesn’t go his way. “Certainly, if I don’t win, I don’t win,” he told Fox News’ Harris Faulkner in an interview that aired Friday night. If he doesn’t win the election, Trump continued, “you go on, do other things.”

Though the president has never given any serious indication that he might not leave office if he were to lose reelection, his comments aired Friday appear to be the first time he has publicly committed to doing so. Still, he told Faulker that if he loses, “I think it would be a very bad thing for our country.”

Trump regularly trolls his critics on the issue, joking at campaign rallies and on various occasions about extending his presidency past the constitutional limit of two terms.

Trump went on to say, “Joe’s not all there. Everybody knows that. It’s sad, really. He’s created his own sanctuary city in his basement.” The above comments come in the final minute of the clip below.