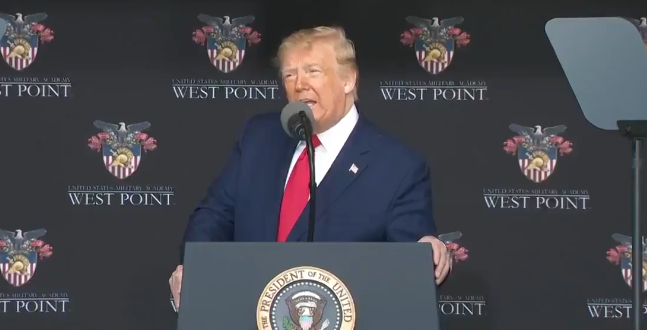 President Trump, in the midst of a Saturday commencement address celebrating West Point’s graduating class of 2020, fired a shot across the bow at China for the coronavirus outbreak.

Trump, speaking to the class of 1,107 graduates, invoked the names of America’s great generals through history and hailed West Point’s two centuries of producing leaders for the U.S. military. But midway through the speech, he called out China for the global pandemic, as he has in the past.

“I want to thank all members of America’s armed forces who stepped forward to battle the invisible enemy, the new virus that came to our shores from a distant shore called China,” said Trump. “We will vanquish this virus. We will extinguish this plague.”

In his West Point Academy commencement speech, Trump likened coronavirus to a military enemy, saying it “came to our shores from a distant land called China” while also praising the National Guard for “ensuring peace, safety, and the constitutional rule of law on our streets.” pic.twitter.com/rRGbiLkLca