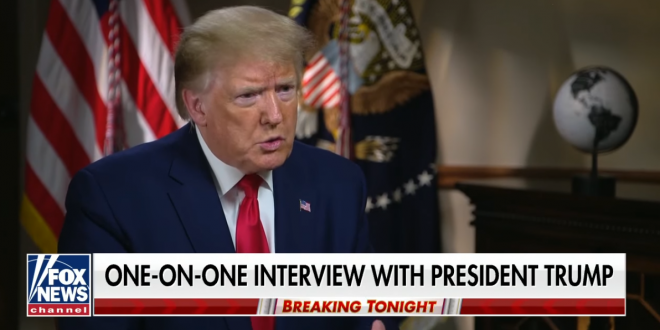 President Donald Trump definitely picked it up somewhere: the saying, tweeted out earlier this month, that “when the looting starts, the shooting starts.” But in an interview today, the US president falsely attributed that quote to a “very tough mayor,” Frank Rizzo of 1970s Philadelphia, to whom he has often been compared.

Trump also contended that he was not making a threat when he posted the tweet but rather was describing an unfortunate progression.

As Fox News’ Harris Faulkner pointed out, however, the quote comes from a former Miami police chief, Walter Headley, who uttered it back in 1967 during civil-rights protests. And the intent, according to Headley, was obvious, with his saying, “We don’t mind being accused of police brutality.”

Sitting across from President Trump on Thursday in a one-on-one interview about the unrest over racism and police brutality sparked by the death of George Floyd, Fox News host Harris Faulkner shifted the conversation to Trump’s tweets.

“You look at me, and I’m Harris on TV, but I’m a black woman. I’m a mom,” Faulkner told Trump. “You’ve talked about it, but we haven’t seen you come out and be that consoler in this instance.

“And the tweets, ‘When the looting starts, the shooting starts,’ ” she continued. Faulkner, who has defended Trump against critics in the past, then paused, briefly averting her eyes before looking back at the president. “Why those words?” she asked.

Trump responded, “Well, it also comes from a very tough mayor, who might have been police commissioner at the time, but I think mayor of Philadelphia named Frank Rizzo. And he had an expression like that, but I’ve heard it may times from – I think it’s been used many times.”

Faulkner: Why those words?
Trump: So that’s an expression I’ve heard over the years
Faulkner: Do you know where it comes from?
Trump: I think Philadelphia. The mayor of Philadelphia.
Faulkner: It comes from 1967 pic.twitter.com/J8EgoVXcqX

Steve Doocy asks if Donald Trump “understands the historical significance” of Juneteenth, and it only gets more uncomfortable from there. In this Fox viewer’s opinion, Faulkner said a lot more than the words she actually spoke. pic.twitter.com/O5IMq8FFBb