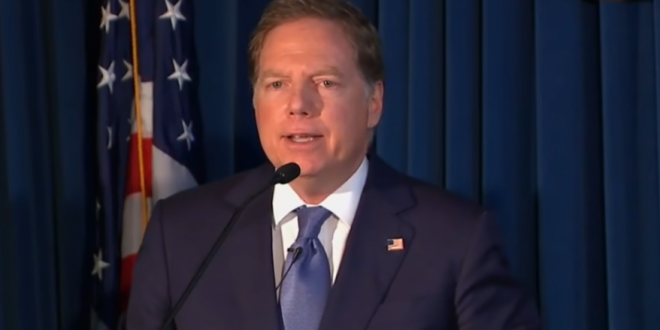 U.S. Attorney Geoffrey Berman, the top federal prosecutor in Manhattan, confirmed Saturday he is leaving his position immediately, according to reporter Jacqui Heinrich.

Berman, the powerful U.S. attorney in Manhattan who has been overseeing investigations of Trump’s allies, showed up at his office to work Saturday, but he has decided to quit. The Department of Justice issued a statement from Berman.

Before he stepped aside, Berman was prepared to set up an extraordinary political and constitutional clash between the Justice Department and one of the nation’s top districts, which has tried major mob and terrorism cases over the years and is investigating Trump’s personal lawyer, Rudy Giuliani.

Graham had previously indicated he wouldn’t move forward on the nomination of Jay Clayton, chairman of the U.S. Securities and Exchange Commission, to replace Geoffrey S. Berman, the U.S. Attorney in the Southern District of New York.

Berman had said he wouldn’t step down after being ousted by Attorney General William Barr. Barr said Saturday Trump ordered Berman fired — although the president didn’t confirm the ouster, and told reporters it wasn’t his department.