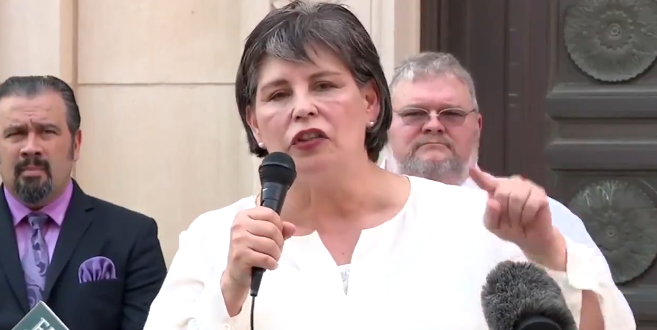 Republican leaders in five Texas counties shared racist Facebook posts, some of which also floated conspiracy theories, leading Gov. Greg Abbott to call for two of them to resign.

Abbott and other top Texas Republicans called for the resignation of the GOP chairs in Bexar and Nueces counties after they shared on social media a conspiracy theory that Floyd’s death was a “staged event,” apparently to gin up opposition to President Trump.

Meanwhile, the GOP chairman-elect in Harris County, Keith Nielsen, posted an image on Facebook earlier this week that showed a Martin Luther King Jr. quote — “Injustice anywhere is a threat to justice everywhere” — on a background with a banana.

In a since-deleted Facebook post, Bexar County Chairwoman Cynthia Brehm [photo] asked for her friends’ thoughts about whether Floyd’s death was staged to damage President Trump with black voters. There is no evidence to support that claim.

Brehm told Capital Tonight that she didn’t write or agree with the post but that a black conservative activist friend asked her to post it. That person disputed Brehm’s claims.

Gov. Greg Abbott has called for Brehm to step down. Brehm says she has no plans to do so and that everyone has a right to free speech.

Brehm last appeared on JMG when she declared that people should not wear masks because the coronavirus is a hoax.

She must resign now.