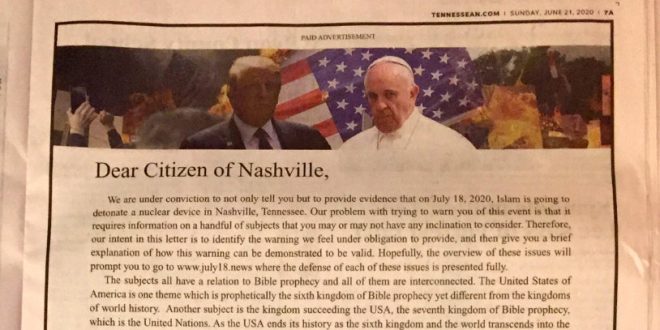 The Tennessean is investigating how a paid advertisement from a fringe religious group was published on Sunday in violation of the newspaper’s long-established standards. The ad featured a bizarre, pseudo-religious “prophecy,” including the declaration of an impending nuclear attack in Nashville by “Islam.”

The ad was immediately ordered to be pulled from future editions by sales executives and the investigation launched. A similar ad, one that did not mention Islam but also contained an end-times prophecy, published in the newspaper on June 17.

The newspaper’s advertising standards clearly forbid hate speech. Advertisements that do not meet the paper’s standards are routinely rejected for publication.

The paid advertisement that appeared in Sunday’s editions of the Tennessean from the group Future For America claims Donald Trump “is the final president of the USA” and features a photo of Trump and Pope Francis.

It begins by claiming that a nuclear device will be detonated in Nashville and that the attack will be carried out by unspecific interests of “Islam”.

The group also ran a full-page ad in Wednesday’s editions of the newspaper stating its intention to warn Nashville residents about next month’s event “so that they may be able to make a decision intelligently”. It was not immediately known how much Future for America paid for the ads.

Jeff Pippenger, who identified himself as the speaker of the Ministry of Future for America, said the newspaper owed the group a full refund. He could not say how much the ad cost.

Ibrahim Hooper, communications director for the Council on American-Islamic Relations, said the ad was “unfortunate” but “symptomatic of the overall rise of Islamophobia, racism and white supremacy.”

Hemant Mehta has some text at The Friendly Atheist:

“The subjects all have a relation to Bible prophecy and all of them are interconnected. The United States of America is one theme which is prophetically the sixth kingdom of Bible prophecy yet different from the kingdoms of world history.

“President Trump has been typified by many biblical leaders and is marked in God’s Word. His presidency and his struggle with the Democratic Party is also a subject of prophecy and provides the backdrop for another matter that is marked prophetically, that of another civil war in the USA.”

Previous Trump’s “Steel Ramp” Whining Has Been Set To Music
Next Attorney General Bill Barr Voted By Mail In 2019, 2012