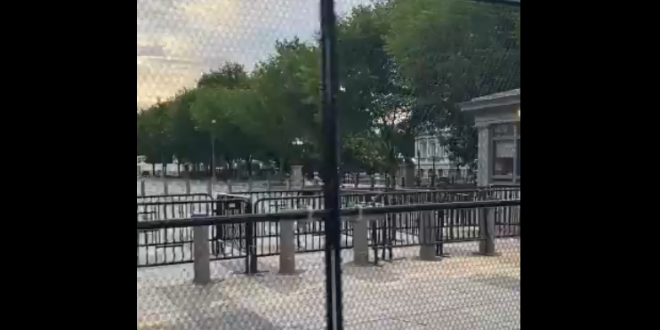 Metal fencing has been installed around the White House complex as protests continue in Washington, part of the widespread Black Lives Matter demonstrations taking place across the U.S.

Video taken by CNN’s Betsy Klein showed a pallet truck stacked with fence panels and a team of workers in high-visibility clothing installing the new perimeter. “More fencing going up around the White House complex early this morning,” Klein wrote.

The new fencing comes after other such barricades were reported in recent days, with some protesters moving to gather outside a Trump International Hotel due to the extended perimeter around the White House.

More fences going up around the White House. pic.twitter.com/5gfRHIGt7x

A fitting image to mark the end of this presidency. A vain, confused, furious man alone in a bunker, under a darkened White House, surrounded—at last—by his fence and his wall. pic.twitter.com/52d2UW9UMr

If Trump erected more than 3 miles of fence around the White House, it would exceed the length of his new wall on the southern border. His bigotry is only exceeded by his incompetence. https://t.co/wzbvjPQRhT

our president is enormously popular and beloved by everybody, which is why the White House now has a third fence around it

In addition to the new fencing, which now extends past the EEOB down 17th Street, @abdallahCNN reports that additional concrete barriers have been installed behind existing fencing at 17th and Pennsylvania Ave. NW pic.twitter.com/aoULVLNFF8

Trump gets his wall, but it’s not on the Mexican border. A massive fence is going up around the entire White House complex this morning. I guess his bunker isn’t enough. pic.twitter.com/SoiCnBNd0H

Previous Rudy Giuliani And Piers Morgan Have Screaming Match Over Trump’s Call To Shoot Looters: “You Fucked Up”
Next Fox News Host Ridicules Obama For “Talking About How Racist The Country Is That Elected Him Twice” [VIDEO]