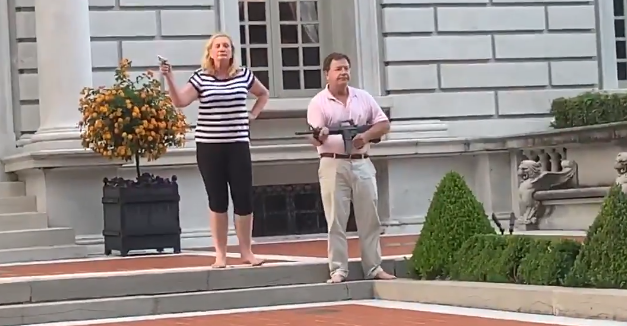 Videos have emerged showing a married couple in Missouri pointing guns at protesters who were demanding the resignation of St. Louis Mayor Lyda Krewson.

Footage which appeared on social media shows a man holding a semi-automatic rifle and a woman pointing a handgun as hundreds of protesters march past their home in the Central West End neighborhood of St. Louis on Sunday.

The pair have been identified locally as personal injury lawyers Mark and Patricia McCloskey. One clip shows several protesters angrily confronting Patricia McCloskey while she points a handgun at them on her lawn.

An armed couple came out of their house and pointed guns toward BLM protesters in the Central West End #KrewsonResign #CloseTheWorkhouse #DefundPolice pic.twitter.com/owD4WDGVCL

A fellow lawyer from Missouri, a guy I know named Mark McCloskey committed an assault tonight in STL by pointing his AR 15 at peaceful protesters. He should be arrested and charged with assault immediately. The MO Bar should revoke their licenses. https://t.co/6N75iFLDtT

Armed couple wields AR-15 rifle or other weapon of war at #BLM demonstrators in Central West End section of St. Louis. Woman points handgun as they walk by the house en route to the Mayor.

This is an unprovoked display of lethal force. #StLouis #mccloskey pic.twitter.com/2YZHwHuXfa

Wild moment lawyer couple brandish an AR-15 and a handgun at BLM protesters marching past their mansion https://t.co/B894Z5t4KA

Previous NYT: US Officials Were Told About Bounties In January
Next Mike Pence: Wearing Masks Is “A Good Idea” [VIDEO]