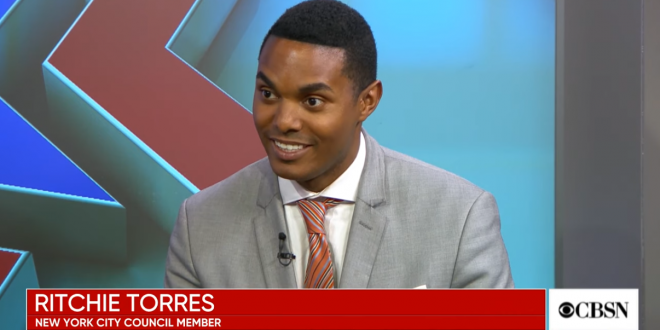 Councilman Ritchie Torres broke out to an early lead Tuesday night in the hotly contested battle for an open Bronx congressional seat, as the openly gay city lawmaker appeared to turn away a challenge from one of New York’s most high-profile conservative politicians.

Torres led the crowded field to replace retiring Rep. Jose Serrano (D-Bronx) with 30 percent of the votes cast during early voting and Primary Day, according to returns from 61 percent of precincts. Assemblyman Michael Blake (D-The Bronx) was in second place with 18 percent.

The final result won’t be official for another week as most people voted by absentee ballot. Still, this is very encouraging. As you can see in the clip below, Diaz was in rather a foul mood last night. Bronx United, a coalition formed to oppose Diaz, has already declared him the loser, snarkily using Diaz’s standard “you should know” opening to all of his press releases.

You should know that Ruben Diaz Sr. will not win in #NY15. Please see statement from Bronx United here pic.twitter.com/V8oqOMtKBi

I’ve seen enough: NYC Councilman Ritchie Torres (D), 32, has won the Dem primary for #NY15, the most Democratic seat in the country.

In 2013, Torres became the first out LGBT person ever elected in the Bronx. He’s a potential national star.

An angry Rubén Díaz doesn’t want to talk to NY1’s @JuanMaBenitez as he leaves his election night event. #NY15 pic.twitter.com/bbOugshdgD

If Torres’ lead holds, he’d be the first openly gay Black member and first openly gay Latino member of Congress. And he’d do so while defeating fellow councilman Ruben Diaz, Sr., known for his homophobic beliefs, in the primary.

After the rude outburst by Diaz Sr. earlier on @NY1, his opponent @RitchieTorres (currently leading his race) offered a refreshing change and admirable personality with NY1’s @JuanMaBenitez. The Bronx should be very proud to be represented by Torres. https://t.co/2ocqDtur8J