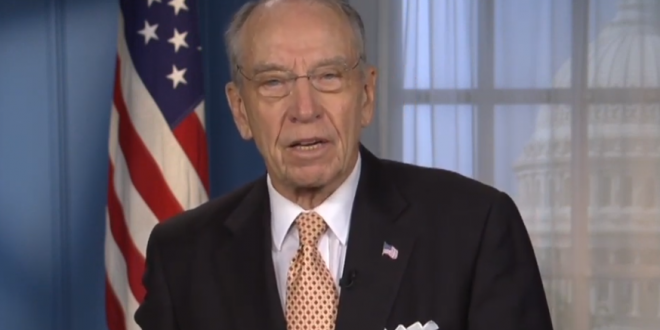 Conservatives are seething over Justice Neil Gorsuch’s opinion that cemented new protections for LGBTQ people. The Senate Republicans who confirmed him? Not so much. The Republican Party seemed generally supportive of both the substance and process by which the Supreme Court extended Civil Rights Act protections to gay, lesbian and transgender workers. President Donald Trump declined to trash the decision, calling it “powerful” — and his party largely agreed with the Supreme Court’s surprising ruling.

“It’s important that we recognize that all Americans have equal rights under our Constitution,” Sen. Deb Fischer (R-Neb.) said. “I’m fine with it.” “It’s the law of the land. And it probably makes uniform what a lot of states have already done. And probably negates Congress’s necessity for acting,” said Sen. Chuck Grassley (R-Iowa), who ran the Senate Judiciary Committee during Gorsuch’s confirmation.

“It demonstrated Gorsuch’s independence,” Senate Majority Whip John Thune said. “The country’s obviously changed a lot on that issue. And I assume that he looked at the facts and the law and that’s the conclusion he came to. And that’s what, when we nominated him and confirmed him, we wanted him to.”

At the link (no paywall) you’ll see that the only Senate Republican wailing about the ruling is Ted Cruz. Others, including Mitt Romney and Josh Hawley, just say it’s a decision that should have been left up to Congress.

So the #GOP Platform is meaningless? And #Republican rhetoric re: judicial "#originalism" is a lie? "GOP backs Gorsuch’s gay rights decision after conservative blowback": #SCOTUS https://t.co/hHeaD1eN3C

Previous McConnell: I’ll Still Be GOP Leader If We Lose Majority
Next Scary Robot Dogs Now On Sale To Public For $75,000