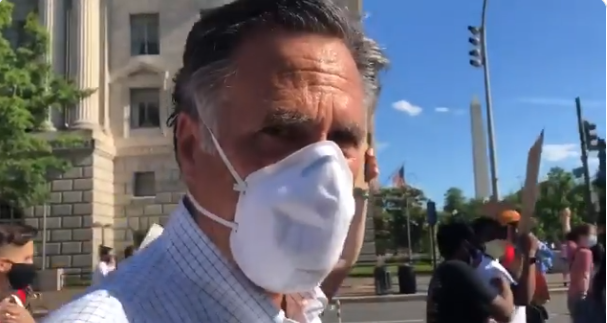 Sen. Mitt Romney marched in a faith-based demonstration in Washington, D.C. on Sunday organized by local pastors to protest the death of George Floyd. “We need a voice against racism, we need many voices against racism and against brutality. And we need to stand up and say that black lives matter,” Romney told a reporter at the march.

Hundreds walked along closed roads toward the White House in a faith-based march meant to recall the 1965 Selma-to-Montgomery civil rights marches in Alabama.

On Saturday, Romney tweeted a photo of his father, George Romney, marching in a civil rights protest in Detroit in the late 1960s. The elder Romney, who served as governor of Michigan from 1963 to 1969, was a strong supporter of the civil rights movement.

This is my father, George Romney, participating in a Civil Rights march in the Detroit suburbs during the late 1960s—“Force alone will not eliminate riots,” he said. “We must eliminate the problems from which they stem.” pic.twitter.com/SzrcAyfPD8

.@MittRomney is marching with a group of nearly 1,000 Christians to the White House. Here he is on video saying why he’s walking: “… to make sure that people understand that Black Lives Matter” https://t.co/KCxJNchCMs pic.twitter.com/Za0Am2WL8g