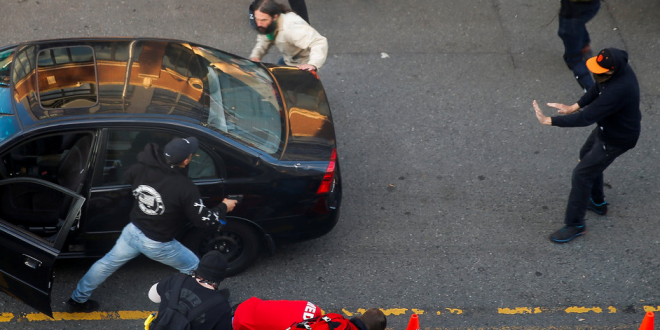 Just as Seattle’s mayor and police chief were wrapping up a Sunday night news conference about ongoing protests against police brutality, a 27-year-old man at a demonstration on Capitol Hill was shot by a gunman who drove into the crowd.

The victim was taken to Harborview Medical Center, where he was listed in stable condition, and the gunman was detained.

The shooting apparently happened while the gunman was still in the car. Dressed in blue jeans, a black sweatshirt and a black baseball cap, he then got out of his car, gun in hand, and made his way through demonstrators toward a line of police before he was taken into custody.

Videos showed protesters appearing to chase after a black Honda Civic as it sped down the street toward a larger crowd, slowing just as it crashed into a metal barrier near an intersection. The protester jolted backward, falling onto the pavement. Bystanders and medics rushed to his aid. The suspect, who has not been identified by police, then exited the vehicle, as the people who had just surrounded his car fled in all directions.

The suspect then headed toward the heart of the protest where hundreds were gathered in the street. With nowhere to go, some raised their hands in the air. Some lay on the ground. The man ran through the crowd toward the police line on the other side of the protesters. Once he emerged from the crowd, he walked toward police with his hands in the air. He walked nearly all the way up to the police line before officers took him away, video of the arrest shows.

Here’s the moment the suspect drove into a crowd of protesters in Seattle, and then shot a man who tried to pull him out of the car before storming off with a gun:pic.twitter.com/Fz2xMTZRlK

The officers are taking heavy projectiles, coming from the crowd. A male, armed with a gun is in the intersection of 11th and Pine ST. CS gas has been authorized. In the interest of public and life safety, leave the area now.