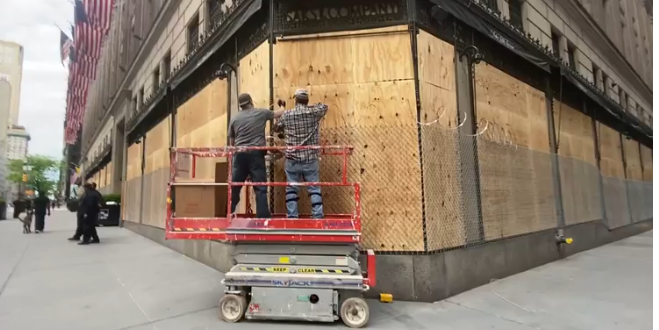 Saks Fifth Avenue surrounded its flagship Manhattan store with razor wire on Tuesday to keep thieves from smashing their way in and making off with troves of expensive merchandise, The Post has learned.

The luxury retailer has also hired private security guards with specially trained dogs to protect the premises in the wake of Monday night’s looting of Macy’s iconic, Herald Square location.

At least seven German shepherds, Belgian Malinois and pit bull dogs were also on hand, along with guards who will use them to patrol outside the store in an attempt to deter looters.

Never seen anything like this. Razor wire and private security at @saks on 5th Ave in NYC. pic.twitter.com/NsHeac7bJN