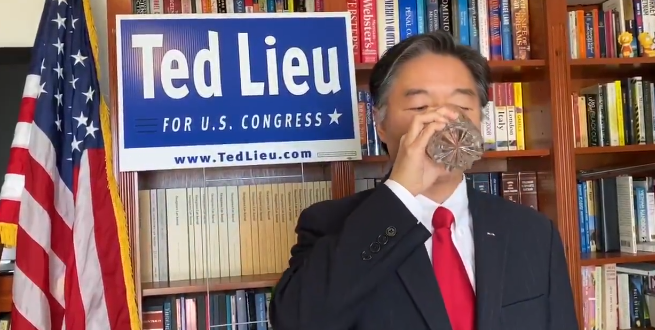 Rep. Ted Lieu: Vote For Me, I Can Also Drink Water

Rep. Ted Lieu, standing in front of a campaign sign and wearing a bright red tie, is shown using one hand to drink from a glass of water. He looks around, nods, brings the glass back up for round two, then tosses the remaining water. It’s a reenactment of Trump drinking a glass of water during his Tulsa rally on Saturday night, after appearing to have trouble doing so during his commencement speech last weekend at West Point.

The clip has 3.7 million views.

Today I released my first campaign ad. It was produced by my kids. Let me know if you like it.https://t.co/OeXvghcnGv pic.twitter.com/CuFKMzdrZB

I approve your new campaign ad @tedlieu 🥂
Your producers should get a raise or at least get to stay up and watch tv as much as they want tonight. 🤗 pic.twitter.com/sVkry1rupR

Previous Trump Lawyer: “Thousands” Were Turned Away At Rally
Next Trump’s “Steel Ramp” Whining Has Been Set To Music