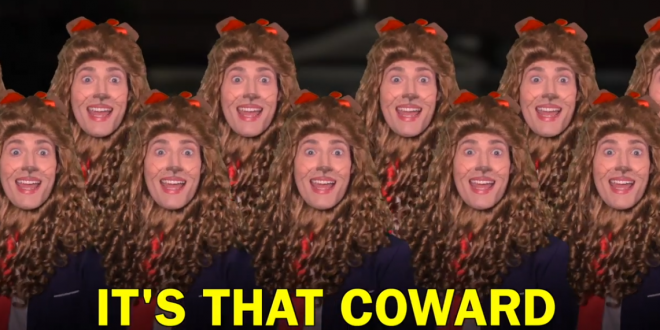 Randy Rainbow: That Coward Is “The Bunker Boy”

Randy Rainbow is back this morning, reaching deep into musical archives with Bunker Boy, a parody set to the tune of The Jitterbug, which was cut from the 1939 classic, The Wizard Of Oz.

“The Jitterbug” was both a jazzy development of the plot and a nod to the then-popular bobby-soxer dance craze. As the song begins, the four friends see a jitterbug flitting in the shadows from tree to tree and become frightened.

The Jitterbug puts a magical influence on the characters, forcing them to dance the Jitterbug frenetically. Soon there are many jitterbugs, and eventually, everyone collapses from exhaustion and are subdued by the Witch’s army of flying monkeys.

The Wicked Witch of the West makes reference to this number in the finished film, telling the leader of the monkeys that she had sent “a little insect to take the fight out of them”, a line that is perhaps the most obvious continuity error in the film.