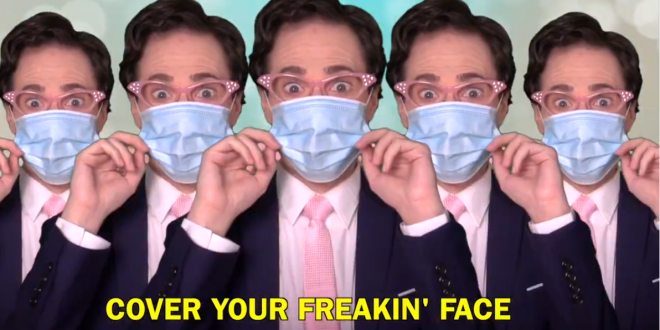 Randy Rainbow is back this morning to mock Trump’s refusal to wear a mask with “Cover Your Freakin’ Face.” The piece is set to the tune of “Put On A Happy Face” from the 1960 Broadway musical Bye Bye Birdie in which the song was performed by Dick Van Dyke.

The show’s plot was inspired by Elvis Presley having been drafted into the army and the character Conrad Birdie’s name was a take on country star Conway Twitty.

Other stars in the original Broadway production were Chita Rivera, Paul Lynde, and Charles Nelson Reilly, the last of whom performed as Van Dyke’s understudy during tapings of The Dick Van Dyke Show. Van Dyke reprised the role in the 1963 movie version.