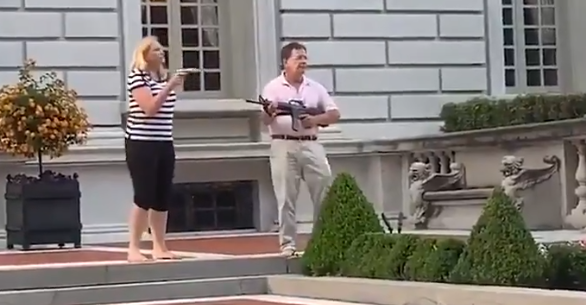 Turning Point USA chief creative officer Benny Johnson attempted to claim that a white ​couple that aimed firearms at Black Lives Matter protesters in St. Louis​, Missouri, were not supporters of President Donald Trump​, but rather Democratic Party voters. Johnson turned to Federal Election Commission data to support his claim, but there was a problem: ​He found the wrong guy.

If Johnson had bothered to continue scrolling on the election data page​ or had taken a few additional seconds to check where the individual he singled out in his tweet registered their donation from, he would have seen that ​the​ Mark McCloskey he found was another man by the same name who lives in Michigan—not Missouri. Rather, the gun-toting McCloskey in Missouri is recorded donating $2,700 toward the Trump campaign and allied Republican causes during the 2016 election cycle.

Johnson, as some of you may recall, was fired from two outlets for plagiarism before joining Turning Point USA. His false tweet about the Missouri cultist was leapt upon by right wing sites and prominent Republicans including Ted Cruz. Hit the link for more.

I deleted this tweet because the FEC screenshot that went viral online was from a different donor of the same name. pic.twitter.com/BvfGhFsUoI

You didn’t think anyone else in America could have that name?

“State” is literally the next column (but somehow left out of your screenshot) and none of the entries list Missouri as the contributor’s state – except for the Mark who donated to the RNC: https://t.co/7YZKQnUeto pic.twitter.com/RfIQKqtBV0

When are you leaving, honey? pic.twitter.com/5LfIUPrD2M