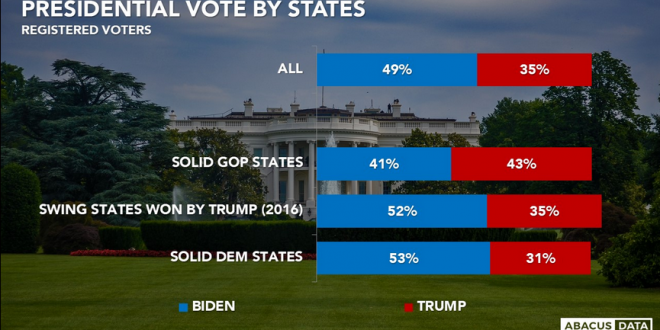 Donald Trump won the last election despite losing the popular vote by 3 points. However, our data suggests he has a bigger hill to climb this year, as he trails the presumptive Democratic nominee by 14 points among registered voters (49%-35%).

Among those most likely to vote (63% of the sample who say they are certain they will cast a ballot), Biden’s margin is 10-points over Trump (51% to 41%). If voter surpasses that 63% threshold, Biden stands to benefit, as he leads by very wide margins among those who might vote.

In swing states that Trump won in 2016 (FL, IA, MI, NC, OH, PA, WI) Biden leads by 17-points. Biden has a 22-point lead in solid Democratic states while Trump leads by a smaller 2-point margin in typically solid Republican states, although some of those states like Arizona, Texas, and Georgia are closer than in 2016.

Previous Trump Rally Attendees To Get Temp Checks And Masks
Next Tony Perkins Has The SCOTUS Sadz: Workplace Rights For LGBTs “Pose A Grave Threat To Religious Liberty”