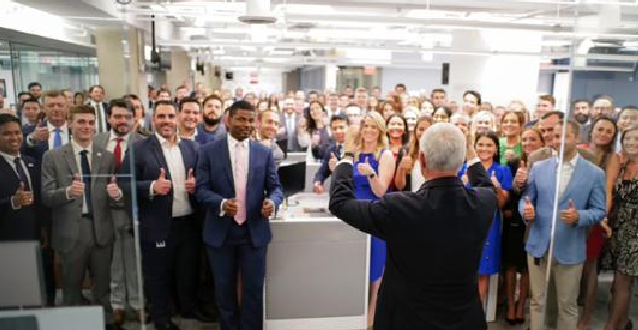 Vice President Mike Pence posted and then deleted a tweet taken at a Trump 2020 campaign office in Arlington, Virginia, which showed dozens of staffers packed in shoulder to shoulder none of whom were wearing masks, which appeared to violate Covid-19 social distancing rules still in effect in that state.

Pence, who still chairs the White House coronavirus task force, posted the image and a call out to “the great men and women of the Trump-Pence Team” at 7:35 p.m. on Wednesday evening. In the image, roughly 100 men and women are crowded in next to each other giving a reciprocal thumbs up to Pence who is standing a few feet away.

The photo appeared to be from the campaign’s Arlington, Virginia, office — Pence was not scheduled to travel on Wednesday and had no public events on his schedule.

In the photo, no one, including the vice president appeared to be wearing a face mask and the group far exceeded the 10-person gathering limit outlined in Virginia’s phase one coronavirus guidelines.

Last month, the pandemic drew closer to the White House when two staffers tested positive for the virus. Trump confirmed at the time that one of those staffers was Pence’s then-press secretary, Katie Miller.