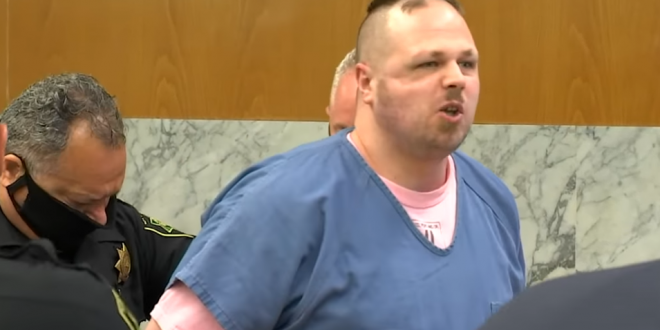 OREGON: Nazi Gets Life In 2017 Anti-Muslim Killings After Telling Survivor He Wished He Had Killed Her Too

A judge Wednesday sentenced double murderer Jeremy Christian to spend the rest of his life in prison — with no chance of ever getting out — for the murders of two fellow passengers on a MAX train in May 2017. The judge also sentenced Christian to more than 25 additional years for other crimes.

Among them were the attempted first-degree murder of Fletcher; assault and hate crimes for striking a Black woman in the eye with a half-filled Gatorade bottle on May 25, 2017; and more hate crimes against two teenage girls, one who was wearing a hijab, when Christian launched on a racist, xenophobic rant on the crowded MAX train on May 26, 2017.

Christian was not allowed in the courtroom because on Tuesday, he’d threatened the first victim to make a statement by screaming that he wished he’d killed her. Christian, however, was allowed to watch the sentencing hearing from another room in the courthouse after victims said they wanted Christian to hear their statements.

All three of the victims were attempting to intervene after Christian began spewing hate speech at two teenage girls, one of who was sporting a hijab at the time. “Go home, we need America here,” Christian reportedly shouted.

According to witness testimony, the attacker also yelled “that he was a Nazi, that he hated all Muslims, blacks and Jews” while traveling on the Yellow line train.

In the days after the deadly stabbing, video and photos surfaced online of Christian speaking at a rally hosted by the far-right group, the Patriot Pray— a controversial organization whose recurring events often spark tensions in the city.