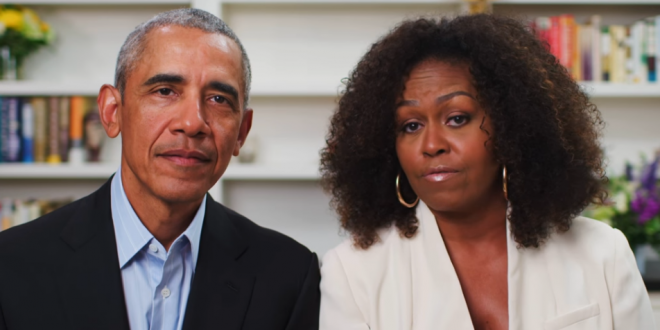 Obamas Address Unrest In Message To Class Of 2020

As in previous public statements of late, Obama never said the name Donald Trump, but left no one unclear who he was spotlighting as gaslighting the divisions in America for personal and ideological gain. “Democracy isn’t about relying on some charismatic leader to make changes from on high,” he proclaimed. “It’s about finding hope in ourselves, and creating it in others. Especially in a time like this. You don’t always need hope when everything’s going fine. It’s when things seem darkest — that’s when you need it the most.”

“The thing is, Class of 2020, what these past few weeks have shown us is that the challenges we face go well beyond a virus, and that the old normal wasn’t good enough — it wasn’t working,” Obama declared in what has become a semi-regular role for the former President to provide national leadership in the absence of such traits coming from the former Celebrity Apprentice host currently in the White House.

Obama didn’t hold back in slamming what he called the “divisions and dysfunction that plague our political system” or on how social media can be used as “a tool to spread conflict, division and falsehoods, to bully people and promote hate.”

“Whether it’s widening economic inequality, the lack of basic health care for millions of people, the continuing scourge of bigotry and sexism, or the divisions and dysfunction that plague our political system. Similarly, the protests in response to the killing of George Floyd, and Breonna Taylor, and Ahmaud Arbery, and Nina Pop, aren’t simply a reaction to those particular tragedies, as heartbreaking as they are, they speak to decades worth of anguish and frustration over unequal treatment and a failure to reform police practices in the broader criminal justice system.”