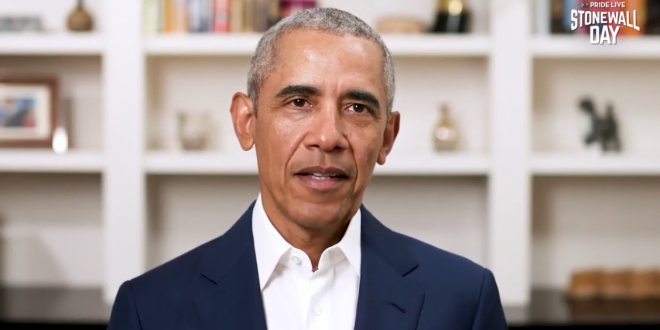 “We’re almost 51 years since the night when the patrons at the Stonewall Inn stood up for their rights and set one of America’s defining victories for civil rights.

“Because of the movement they sparked and the decades of work that followed, marriage equality became the law of the land five years ago, and just this month the Supreme Court ruled that employers can no longer discriminate against LGBTQ workers.

“All that progress is worth celebrating and reflecting on. The struggle and triumph for LGBTQ rights shows how protests and politics go hand in hand, how we’ve got to both shine a light on injustice and translate those aspirations into specific laws and institutional practices.

“So whether we’re fighting to protect a patient from discrimination in the health-care system, or to combat violence against the LGBTQ community, particularly trans women of color, or to link arms with the causes of racial and social justice that have swept the country, I hope you know that your voice can make an enormous difference.

“I hope you all understand what Edie Windsor and Harvey Milk and Bayard Rustin all knew: that progress doesn’t happen on its own. It happens because we stand up, speak out, and demand change.” – President Barack Obama, in a Stonewall Day 2020 live-stream.