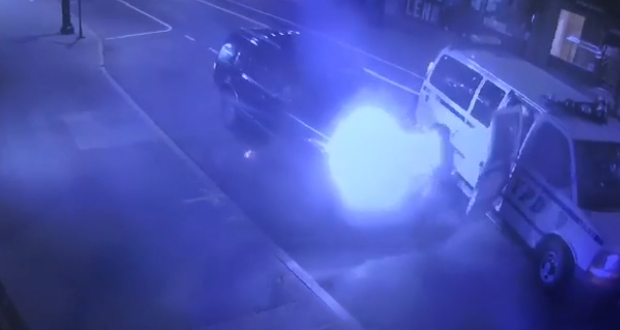 Startling video obtained by the Daily News shows an SUV full of suspected looters ram into a police officer trying to stop them in Greenwich Village early Monday.

The video shows several men running along W. 8th St. just after 3:20 a.m., items in their arms. Three hop into a waiting SUV, as a police van pursues them. The van cuts in front of the SUV, and an officer gets out of the passenger seat.

As he steps toward the SUV, the driver guns it, ramming into the officer. Police said the officers were responding to a burglary at the I Fix Screens cell phone store on W. 8th St. near Fifth Ave., where a group of men jumped out of two vehicles, smashed the front window and ransacked the place.

A shocking video posted on social media shows a New York City police officer being struck by a vehicle early Tuesday in what appears to be a deliberate hit-and-run.

The video shows a dark-colored vehicle driving straight toward the officer and striking him, then shows the officer flying up against a nearby vehicle before landing in the street as both vehicles drive away.

Several people, possibly other police officers, are seen rushing to the victim’s aid. “That’s a f—ing cop!” a woman is heard saying on the video. “Oh sh–!”  An NYPD van then quickly arrives and the injured officer is helped inside it. Suddenly, numerous other NYPD vehicles appear at the scene.

The condition of both officers hasn’t yet been reported.

A NYPD officer is run over in the Bronx:
pic.twitter.com/cJZiZO1HxL