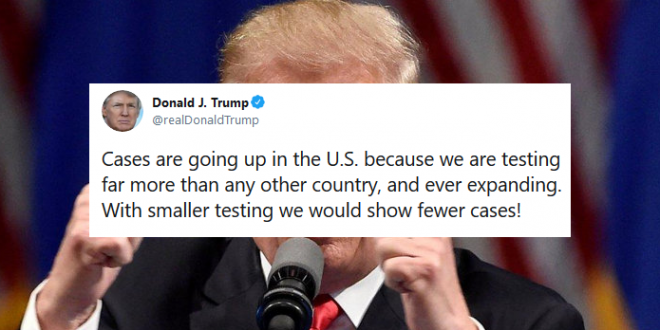 President Trump has spent the past few days arguing that coronavirus cases are only rising because more Americans are being tested. That argument might have been true in April, when testing was still ramping up. It’s not true anymore. Testing rapidly expanded and the overall positivity rate fell rapidly throughout May. And for most of June, the United States has met the WHO’s testing guidelines.

About half a million tests are being conducted daily. Fewer than 5 percent of all tests nationally have been coming back positive — indicating most cases are being detected. “The way to tell whether a rise in cases is indicative of increased spread in the population — rather than a byproduct of conducting more tests — is by seeing how many tests are identifying infections,” as Johns Hopkins epidemiologist Jennifer Nuzzo wrote for The Post.

Cases are going up in the U.S. because we are testing far more than any other country, and ever expanding. With smaller testing we would show fewer cases!

🚨 Trump said if you don’t weigh yourself, you don’t gain weight! 🤯🤡

What’s absolutely wild is you actually believe this.