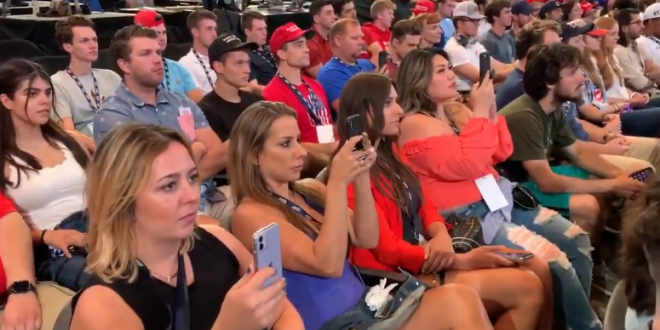 No Masks At Arizona Rally Despite Organizers’ Claim

He continued to poke at Biden’s health, intelligence, family ties and lack of leadership for the majority of his speech and criticized the media for not holding Biden to the same standard of scrutiny that his father receives.

The crowd roared with applause throughout Trump’s speech and frequently interjected responses to Trump’s rhetorical questions.

Michael Andrews, a volunteer with Students for Trump, said the group’s main focus is to recruit voters. He said citizens have a duty to vote, and he will be supporting Trump. He said Trump is “no-nonsense” and “speaks to the American public.” “I believe Joe Biden is part of the establishment and hasn’t done much,” he said.

Tony Smith walked through the line passing out fliers for a protest against face masks. She called the COVID-19 pandemic a “scamdemic” and said people who are worried about it can stay home. “I will not wear a mask and that will be for health reasons, religious reasons, ethical reasons,” she said.

Future COVID victims behaving recklessly. No masks. No distance. Arizona health care workers already are stressed. @SenMcSallyAZ is in Az with @realDonaldTrump This is insane. Trump’s the grim reaper.