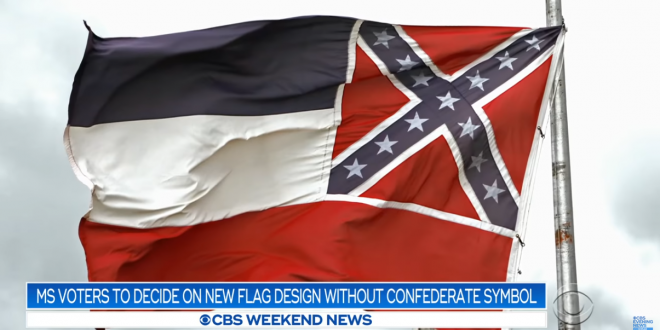 New MS State Flag Must Include “In God We Trust”

The Mississippi state legislature voted on Sunday to replace its state flag, the last in the nation to display the Confederate battle emblem. The removal of the flag marks the latest Confederate symbol to topple in the weeks following George Floyd’s death. The bill passed by a vote of 91-23 in the House and 37-14 in the Senate.

The bill now goes to the desk of Governor Tate Reeves, who on Saturday morning said he would sign the legislation into law, reversing resistance to a legislature-led change to the flag. Mississippians will vote on a replacement flag in the November election. According to the legislation, the current flag design cannot be an option.

Vexillologists shudder: New Mississippi state flag _must_ include the words “In God We Trust” emblazoned on it https://t.co/wBI9Y9Bk2g

It appears the “In God We Trust” requirement is to push for the version posited by Phil Bryant that centers the MS great seal on the current flag.

Please note that seal includes the 11 stars and 11 bars in the shield, denoting the 11 Confederate states.https://t.co/PmusTa6JQ8

Minutes after a historic vote, the first state flag comes down. https://t.co/lxpPqvrxzD pic.twitter.com/Q2HLVYMUo7

The motto “In God We Trust” is inaccurate, exclusionary and intended to brainwash Americans into believing that our nation is a theocracy. Replacing a racist symbol with a Christian Nationalist one isn’t going to cut it. https://t.co/uCvUddtgUm