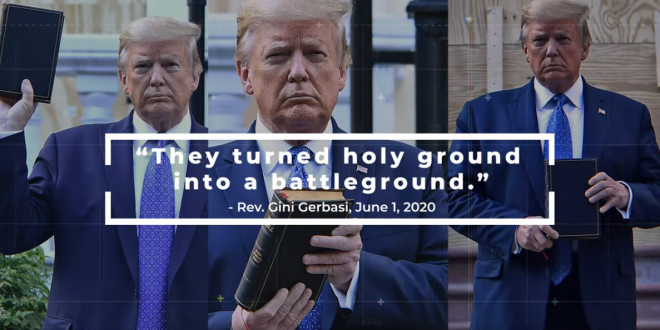 From the Lincoln Project:

The Lincoln Project recognizes the long and distinguished national service of General Milley and honors him for it. Likewise, the Lincoln Project appreciates the service of Secretary of Defense Esper. Nevertheless, their participation in the infamous events of June 1st was an egregious lapse in judgement, and they should resign their offices.

On that day, in front of the White House, the People’s House, Americans exercising their first amendment rights to speech and assembly were assaulted, tear-gassed, pepper-sprayed and beaten on the direct orders of the Attorney General of the United States.

The purpose of this assault was not done in the name of public safety, but to clear a path for President Donald Trump to appear in front of St John’s Episcopal Church to be photographed holding a Bible.

During this 45-minute spasm of violence, the United States Constitution, the Bill of Rights, the Bible, and historic St. John’s Church were desecrated by President Trump. He was accompanied by Chairman of the Joint Chiefs of Staff General Mark Milley and Secretary of Defense Mark Esper.

📺 @realDonaldTrump is no longer hiding that he’s a brazen authoritarian, so desiring of control and power that he’s willing to turn our once peaceful cities into war zones.#AmericaOrTrump pic.twitter.com/8Kn5Zi14Qx