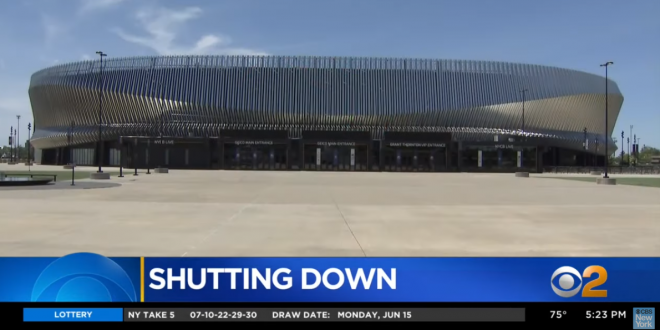 NYCB Live’s Nassau Coliseum will shut its doors indefinitely as billionaire operator Mikhail Prokhorov seeks investors to take over the lease of the 13,000-seat venue and assume the remaining $100 million in debt, a Prokhorov spokeswoman said Tuesday.

The stunning development by Prokhorov’s Onexim Sports and Entertainment, which runs the Coliseum through a lease from the county, comes three months after the arena, along with all other sports and concert venues across the state, closed amid the coronavirus pandemic.

Prokhorov’s decision raises questions about the future of the $1.5 billion Nassau Hub development and is expected to send the Islanders back to Brooklyn’s Barclays Center instead of playing their final season on Long Island before their new arena at Belmont Park opens.

Onexim said that during the shutdown, it had been paying Coliseum employees their full salaries and reimbursed ticket holders for canceled events. The Coliseum, opened in 1972, is home to the Long Island Nets of the NBA G League and the venue has also hosted concerts and wrestling, among other events.

Onexim released this statement: “While we still believe in the enormous long term economic value of the Coliseum and the development of the surrounding land, [Nassau Events Center] recognizes that such value will be best realized by other parties.”

The venue is owned by Nassau County and was Long Island’s sole host for major concert events.