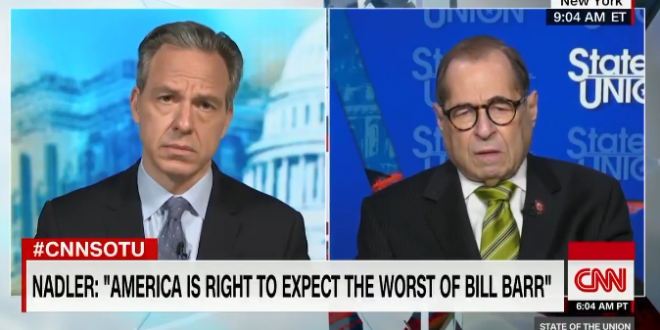 Nadler: Bill Barr Deserves Impeachment But It Would Be A Waste Of Time To Try Due To Corrupt Senate GOP

House Judiciary Chairman Jerrold Nadler (D-N.Y.) told CNN’s “State of the Union” Sunday that Attorney General Bill Barr “deserves impeachment” for his alleged politicization of the Justice Department, but described the endeavor as “a waste of time” because Senate Republicans are “corrupt” and will not vote to convict.

Driving the news: Nadler has launched an investigation into the firing on Friday of the powerful U.S. Attorney for the Southern District of New York Geoffrey Berman, who had been investigating President Trump’s personal attorney Rudy Giuliani — among other politically charged cases.

Chairman Nadler says calls for the impeachment of Attorney General Barr are “a waste of time at this point because we know that we have a corrupt Republican majority in the Senate which will not consider an impeachment no matter what the evidence.” pic.twitter.com/6PVnsWfd8z