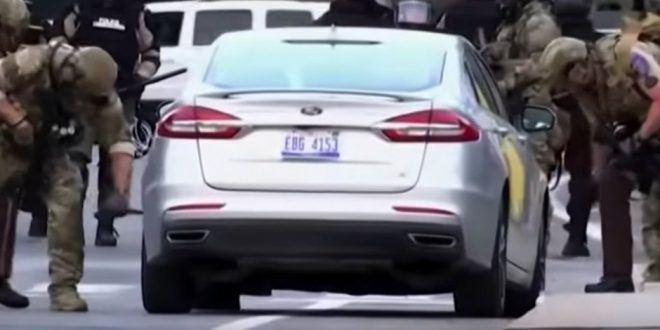 After long nights of tear gas and rubber bullets, some protesters, news crews, and medics in Minneapolis last weekend found themselves stranded: The tires of their cars had been slashed. In a city upended by protests about police brutality after the death of George Floyd, many assumed protesters were to blame. But videos reveal a different culprit: the police.

In the videos, officers puncture tires in a K-Mart parking lot on May 30 and a highway overpass on May 31. “We’re so busy, it’s just unbelievable,” said a tow truck driver in an interview from the K-Mart parking lot with Andrew Kimmel, formerly the head of BuzzFeed’s video team.

The towing company had received “call after call after call.” Asked whose cars were being towed, the tow truck driver said, “Everybody. Medics over there. News crews. Random people that were just here to protest and—tires slashed.”

Department of Public Safety spokesman Bruce Gordon acknowledged that the tires were cut. “State Patrol troopers strategically deflated tires in order to stop behaviors such as vehicles driving dangerously and at high speeds in and around protesters and law enforcement,” he said.

Among the vehicle owners whose tires were damaged was Star Tribune reporter Chris Serres, who was covering the protests the night of May 30 and returned to the Kmart lot about 1 a.m. and saw his car was among a few dozen with flattened tires.