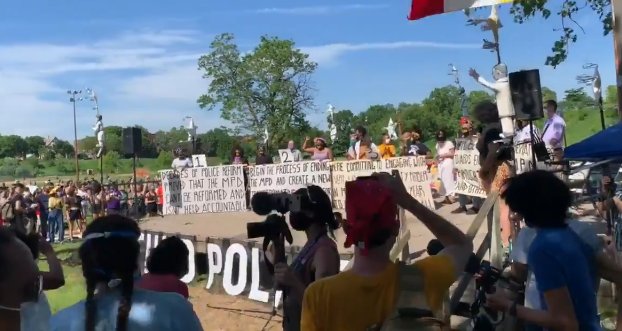 Nine members of the Minneapolis City Council announced their support for de-funding the Minneapolis Police Department and replacing it with a community-based public safety model at a rally in Powderhorn Park Sunday afternoon.

With the support of the nine council members, they have created a veto-proof supermajority in support of disbanding the police department. However, to make significant changes to the department or funding for the department, they will likely need a public vote to change the charter.

There are a total of 12 Minneapolis City Councilmembers. A majority of them now support ending the city’s relationship with the MPD. Notably, Mayor Jacob Frey did not attend the rally Sunday. He was booed at a de-fund the police rally in Minneapolis Saturday afternoon.

Officials in other cities, including New York, have begun to talk of diverting some money and responsibilities from police forces to social services agencies, but no other major city has gone as far in reaction to the protests as the Minneapolis officials have promised to do.

Council members said in interviews on Sunday that they did not yet have specific plans to announce for what a new public safety system for the city would look like. They promised to develop plans by working with the community, and said they would draw on past studies, consent decrees and reforms to policing across the nation and the world.