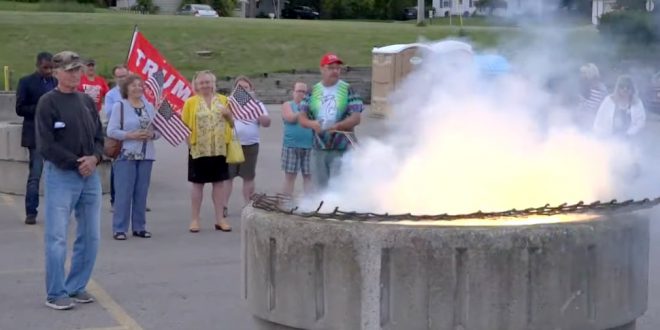 People burned letters informing them that they can vote by absentee ballot in future elections during a protest near Grand Rapids. The applications were burned Friday during an event called Operation Incinerator outside the DeltaPlex Arena in Walker.

Many people had flags, shirts and signs showing support for President Donald Trump and Republicans.

“For them just to issue them without merit, without request to absolutely everybody — that is a great waste of taxpayer money,” said Michael Farage.  Trump in May criticized the move, although he wrongly stated that Secretary of State Jocelyn Benson was sending absentee ballots, not applications.

A GOP activist is hosting an “operation incinerator” event tonight in Grand Rapids, encouraging folks to burn their absentee ballot *applications* in apparent protest of SOS Benson’s move to mail them to all. There will apparently be a “Dumpster of Liberty Lighting Ceremony.”

Republicans in Grand Rapids, MI are hosting an event tonight called “Operation Incinerator” in which people are being invited to burn their absentee ballot applications.

Encouraging your own voters not to vote is, I have to admit, an intriguing strategy for winning elections.