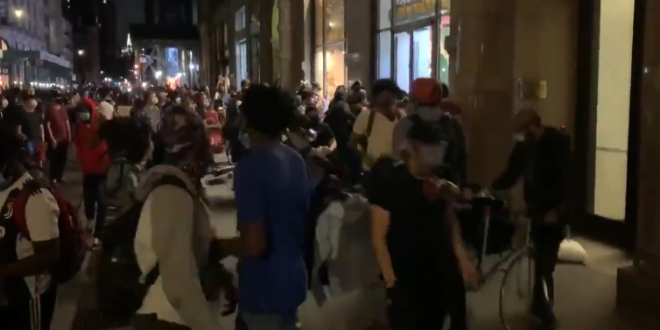 The NYPD made hundreds of arrests overnight as protest continued across the country over the death of George Floyd in police custody. Video shows luxury stores, like Chanel, targeted in SoHo. Fireworks were set off and some windows smashed as large crowds gathered in the street.

Officers now have the area blocked off as they investigate. While Sunday’s demonstrations started peacefully, they once again took a violent turn for the fourth straight night.

A group of 12 people were busted by cops outside Nike Soho on Broadway as a number of high-end boutiques — and even a Bloomingdale’s department store — were looted overnight Sunday.

A witness to some of the looting mayhem on Greene Street said the suspects appeared to have a system, where one group would breach the stores as others lie in wait outside in getaway rides. “The looters have been going systemically from store to store,” the witness said. “It was hundreds of people.”

Outside of Nike Soho, police had stopped a car filled with a box of merchandise, including something from Gucci — which was among one of several luxury stores looted in the neighborhood.

From my balcony. Soho, Manhattan. Lots of people, fireworks. @Versace , @mooseknuckles and others being looted. #protests2020 pic.twitter.com/4XbGJpalPB

The looting in SoHo Is quite an elaborate scheme. it’s a complicated web of cars with out-of-state plates, the use of @Revel scooters, @CitiBikeNYC’s and @Uber’s to get away. But most that i’ve observed have been waking away with the goods in hand past cops. pic.twitter.com/X1I4r1cHQo

Meanwhile Riots and looting continue around New York City : A Rolex store in the Soho Neighborhood is looted . #NYCpic.twitter.com/WG8K3gIKkn

#Looting in #Soho. @thenorthface is being emptied out by #Rioters in #NYC. #NYPD is M.I.A. What is going on? Feels like I’m living in “The Purge” #NYCPROTEST #JusticeForGeorge #riots2020 #Rioting pic.twitter.com/m9e8KbBWRt

Aftermath of the looting and destruction in #Soho around 6am today. People still attempting to loot despite police presence everywhere in the area. (1 of 3) #nyc pic.twitter.com/buDLotzDMV

I honestly never thought I would see a robbery in progress but tonight I did. Dozens of robberies in SoHo tonight from small stores to big name brands. Words can’t describe it. @News12BK @News12BX #GeorgeFloyd #NYCPROTEST #GeorgeFloydProtests #protests #newyorkprotest #looting pic.twitter.com/92aG2RuFqf