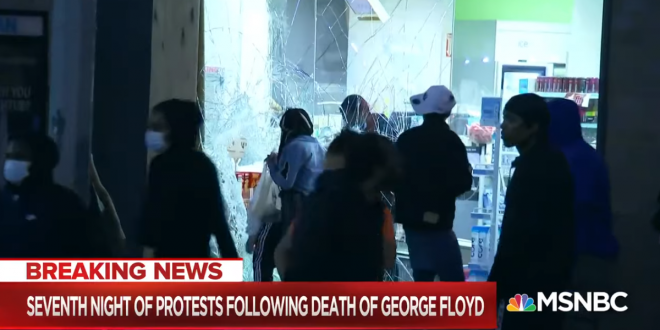 Disturbing footage shows swarms of looters rushing into one of the world’s most famous stores — Macy’s flagship on Herald Square — as Midtown descended into chaos overnight. One overhead video showed looters racing into one of the entrances Monday night — with only a small unexplained explosion seeming to halt the rush.

“NYC curfew won’t be stopping them tonight…” Daniel McCarter noted along with the video. Other clips showed a steady stream of cops finally arriving to follow the looters inside the store. “Hundreds of looters and rioters here with absolutely no concerns about cops being here,” Rachel Olding said along with the clip.

Relentless looters hammered away at the windows of a Manhattan skateboard shop and a Union Square department store Monday night with the NYPD nowhere in sight, shocking video from the scene shows.

One video, recorded by a Daily News reporter, shows a group of men, all wearing masks, using bats and wooden planks to pound at windows at Zumiez, a skateboarding apparel store at Broadway near E. 13th St. in the East Village.

About 500 protesters returned an hour later, and the thieves used the crowd as cover, hitting a Banana Republic and Sephora store on Fifth Ave. near 18th and 19th Sts.

Cops running into Macy’s at Herald Square as it was being looted. Hundreds of looters and rioters here with absolutely no concerns about cops being here pic.twitter.com/NItOU7POiL

People rushed into a Nike store in Manhattan and carried out armloads of clothing. Near Rockefeller Centre, storefront windows were smashed and multiple people arrested. Wreckage littered the inside of an AT&T store.

Video posted on social media showed some protesters arguing with people breaking windows, urging them to stop, but instances of vandalism and smash-and-grab thefts mounted as the night deepened.

“We worked hard to build up the business, and within a second, someone does this,” said the owner of a ransacked Manhattan smoke shop, who identified himself only by the name Harri. “Really bad.”