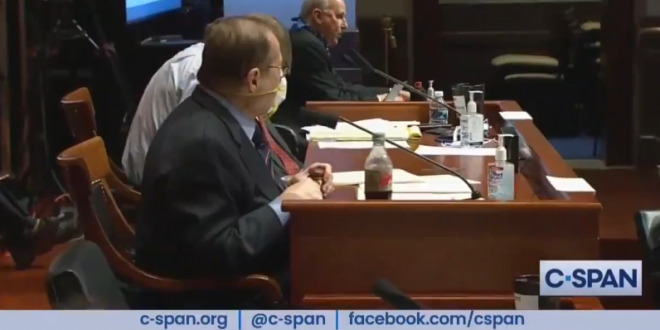 The House Judiciary Committee on Wednesday held an oversight hearing focusing on Attorney General William Barr’s decisions as head of the Justice Department. As part of the proceedings, the committee heard testimony from two DOJ officials: Aaron Zelinsky, a federal prosecutor at the US attorney’s office in Baltimore, and John Elias, a senior official in the department’s antitrust division.

The committee also heard testimony from two former DOJ officials: former Attorney General Michael Mukasey and former Deputy Attorney General Donald Ayer. Rep. Louie Gohmert began tapping on his desk to disrupt Ayer’s opening remarks because he had gone over his time limit. When Democratic lawmakers asked Gohmert to stop, he responded, “There’s no rules about when you can make noise.” The hearing briefly devolved into chaos as Gohmert continued interrupting Ayer’s testimony.

“There’s no rules about when you can make noise” — Louie Gohmert tried to cut off Ayer’s opening statement, but Ayer was undeterred. pic.twitter.com/ILQrusx83g

Democrats ask for the Sergeant at Arms to remove Gohmert from the hearing room because he refuses to stop banging on a table pic.twitter.com/PY3x4yWcYn

Reps. Nadler & Johnson fail to get Gohmert to stop. Johnson asks if sergeant-at-arms could be brought in.

As you watch Louie Gohmert try and disrupt this hearing, remember he was one of the main congressmen who pushed the Obama birther conspiracy theory.

Gohmert co-sponsored a Birther Bill in 2009.

Louie Gohmert is a damned embarrassment. He’s wasting the time & resources of the American people by rapping on his desk like a four-year-old while the witnesses try to testify. He doesn’t deserve to be within a country mile of Congress.

As Louie Gohmert does his usual clown show tactics, your periodic reminder that he campaigned for Roy Moore the day before the special election, weeks after Moore was credibly accused of child molestation. pic.twitter.com/xkteXscqVn