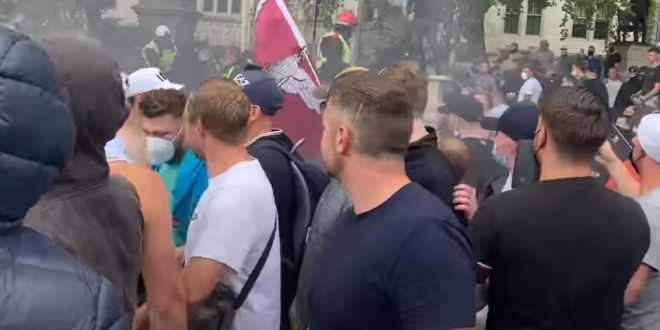 London Mayor Sadiq Khan is warning people to stay away from the center of the city because far-right groups are expected to converge there, raising the potential for violent clashes with anti-racism protesters.

“We have intelligence that extreme far right groups are coming to London ostensibly, they say, to protect the statues, but we think the statues may be a flashpoint for violence,” Khan said on Saturday morning.

Anti-racism protesters rallied again around Britain on Saturday, with scuffles breaking out in London as counter-demonstrators also came out to protect monuments targeted for their links to colonial history.

In and around Parliament Square, hundreds of people wearing football shirts, chanting “England, England”, and describing themselves as patriots, gathered alongside military veterans to guard the Cenotaph war memorial.

The group sang songs in support of right-wing activist Stephen Yaxley-Lennon, who goes by the name of Tommy Robinson. “Winston Churchill, he’s one of our own,” they also chanted, near his statue which last weekend was sprayed with graffiti reading: “Churchill was a racist”.

Demonstrators have attacked police during violent clashes in central London, as football hooligans, veterans and far-right groups descended on the capital vowing to “defend” memorials.

People have reportedly hurled bottles and fireworks and attempted to storm through barriers as police hold them back, while footage showed others throwing punches at officers dressed in riot gear.

Home secretary Priti Patel condemned the “unacceptable thuggery” of protesters, while London mayor Sadiq Khan warned ”perpetrators will feel the full force of the law”. Protesters held up ‘All Lives Matter’ banners, but denied they were far-right supporters.