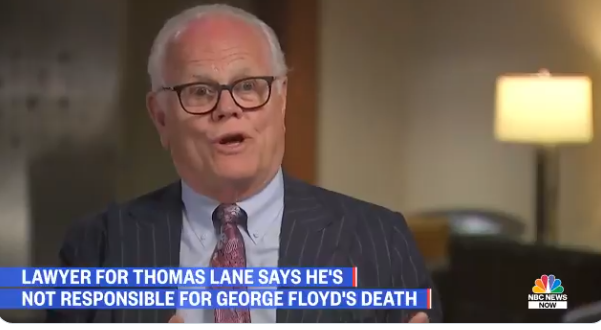 Lawyer For MN Cop: Bystanders Should Have Helped

The lawyer for an officer charged in George Floyd’s fatal arrest appeared on Chris Cuomo’s CNN show Monday night to profess his client’s innocence, and earned Cuomo’s criticism for suggesting that bystanders could have intervened. Earl Gray relayed details of the arrest garnered from his client Thomas Lane’s body camera footage, which has yet to be released to the public.

In the CNN interview, Gray argued that Lane didn’t “have a real good view” of what was going on, since he was busy holding down Floyd’s feet, and there was another officer positioned between himself and Chauvin. Gray then criticized the bystanders for not intervening. “If the public is there and they’re so in an uproar about this, they didn’t intercede either,” Gray said.

The attorney for one of the officer’s charged in George Floyd’s death says that if the public is so concerned about Floyd’s death, why didn’t any citizen witnessing the incident intervene. What?!! pic.twitter.com/JzTBzCZSOB

See what he told @gabegutierrez in an exclusive interview.

Previous Tucker Carlson: This Is Definitely Not About Black Lives
Next Officials Blindsided By Cut To US Troops In Germany