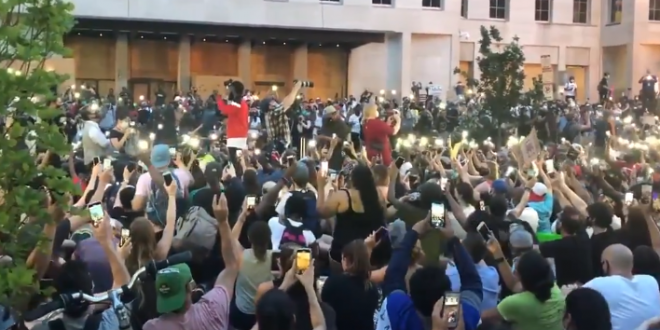 Demonstrations in cities across the U.S. to condemn racism and police abuses remained large but turned notably more subdued on the eve of a Thursday memorial service for George Floyd that kicks off a series of events to mourn the man whose death empowered a national movement.

The calmer protests came on the same day that prosecutors charged three more police officers and filed a new, tougher charge against the officer at the center of the case.

The move by prosecutors punctuated an unprecedented week in modern American history, in which largely peaceful protests took place in communities of all sizes but were rocked by bouts of violence, including deadly attacks on officers, rampant thefts and arson in some places.

Health care workers took a knee and cheered on protesters in NYC pic.twitter.com/8xV5HIGf6o

The scene tonight in South Minneapolis.

I’d be lying if I said this didn’t warm my heart. pic.twitter.com/JBLeH6UsTu

Surreal, beautiful, peaceful scene outside the White House as a man sings “Lean On Me” and thousands and thousands of protesters raise lighted cellphones and join their voices with his. pic.twitter.com/iAr0WWYc3u

Foundry Methodist ringing their bells in support of the march@PoPville pic.twitter.com/5R8tNCIJGb

!!! Crowd of thousands outside the White House singing Lean On Me. This must be the closest we’ve come to a concert in months: pic.twitter.com/CzpQxwLQGs