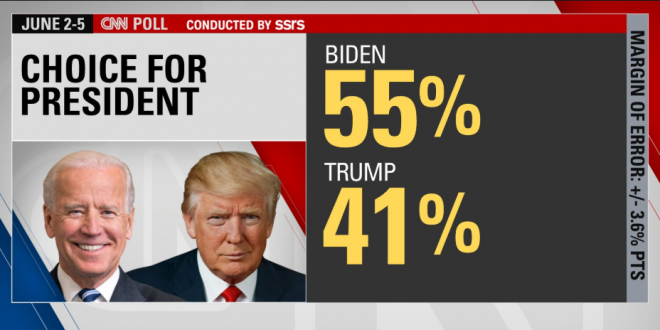 A new CNN Poll conducted by SSRS finds Trump’s approval rating down 7 points in the last month as the President falls further behind presumptive Democratic nominee Joe Biden, whose support now stands at its highest level in CNN polling.

Overall 38% approve of the way Trump is handling the presidency, while 57% disapprove. That’s his worst approval rating since January 2019, and roughly on par with approval ratings for Jimmy Carter and George H.W. Bush at this point in their reelection years. Both went on to lose the presidency after one term.

In the race for the White House, among registered voters, Trump stands 14 points behind Biden, who officially secured enough delegates to win the Democratic nomination in CNN’s delegate estimate on Saturday.