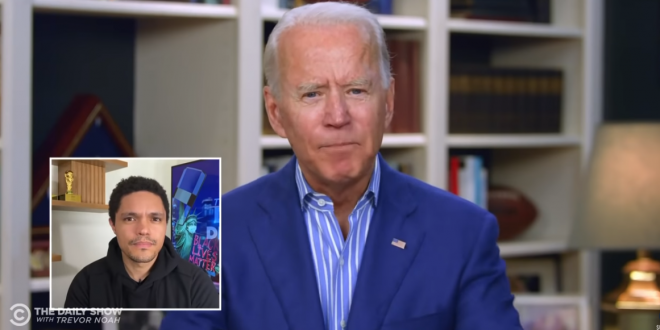 Joe Biden: Trump Will Try To Steal The Election [VIDEO]

“This president is going to try to steal this election,” Biden, the presumptive Democratic presidential nominee, told Comedy Central’s The Daily Show With Trevor Noah. “This is the guy who said all mail-in ballots are fraudulent — voting by mail — while he sits behind a desk in the Oval Office and writes his mail-in ballot to vote in a primary,” Biden added.

He suggested leaders within America’s armed forces — including former military officials who have spoken out against the president in recent weeks — would eventually force Trump from office.

“I was so damn proud. You have four chiefs of staff coming out and ripping the skin off of Trump, and you have so many rank-and-file military personnel saying, ‘Whoa, we’re not a military state. This is not who we are,’” Biden said. “I promise you, I’m absolutely convinced they will escort him from the White House with great dispatch.”

Previous Labor: 1.5M New Jobless Claims, 44M Over 12 Weeks
Next Joint Chiefs Of Staff Chairman Apologizes For Marching Into Park With Trump: “I Should Not Have Been There”