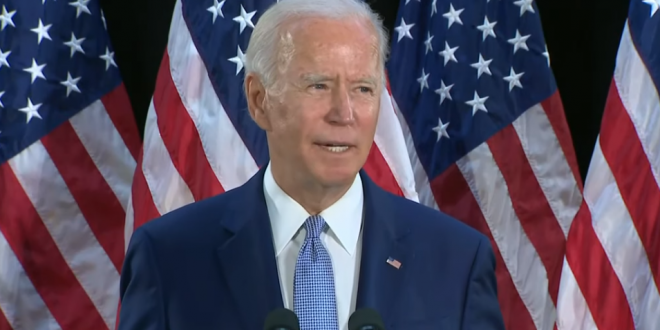 While Biden’s press conference in Delaware was ostensibly about how he would respond to the coronavirus pandemic, the former vice president slammed the current White House occupant for his response to reports that Russian intelligence operatives offered to pay bounties to Taliban-linked militants who killed U.S. troops in Afghanistan.

Trump on Sunday denied that he had been briefed about the matter before the New York Times reported on it over the weekend.

Biden accused Trump of “waving the white flag” and refusing to lead the country through a pandemic that has killed 125,000 Americans and led to Depression-level unemployment. “Despite the administration’s propaganda that their response should be a cause for celebration, despite President Trump’s request that we should slow down, testing because he thinks that makes it look bad, COVID-19 is still here,” Biden said. “It didn’t have to be this way.”

Biden said a national system of testing for the virus and tracing the exposure path of those who are diagnosed is necessary to restore enough confidence for businesses to reopen and consumers to re-engage in the economy. And he added that widespread use of masks and social distancing practices must be normal protocol for “foreseeable future,” and he warned that COVID-19 “will likely worsen” during the coming flu season.

“This president talks about cognitive capability. He doesn’t seem to be cognitively aware of what’s going on,” Biden said on Tuesday afternoon during a press briefing in Wilmington, Delaware.