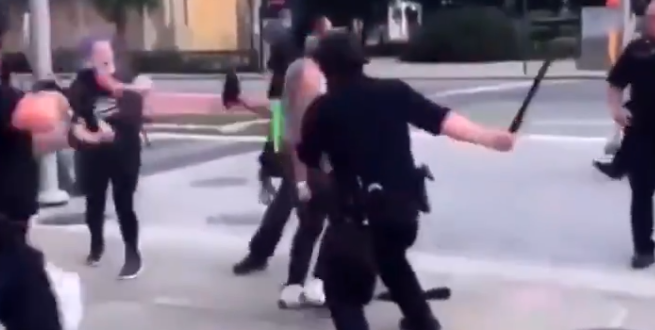 The Indianapolis Metropolitan Police Department is investigating the actions of several officers captured on video using batons and pepper balls to subdue a woman on a downtown sidewalk Sunday night, a spokeswoman said. The video, shared widely on Twitter and Facebook, recorded what happened to two women arrested by officers at the corner of North Pennsylvania and East Washington streets sometime before 9 p.m.

The video begins with a white male officer holding one of the women, who is black, from behind. The officer’s left arm is under her left arm and positioned near her chest. She twisted out of his grasp and took a couple of steps away before being surrounded by a few other officers. There are audible pops heard on the video and several dust clouds appeared near the woman, indicating that officers fired pepper balls. Two officers strike her with batons until she falls to the sidewalk.

I counted seven strikes with the baton.

The cop groped her and when she tried to break away, she was beaten while standing still.

THIS IS AN ATTEMPT TO CRUSH DISSENT LIKE A DICTATORSHIPpic.twitter.com/j4Kzei2INx