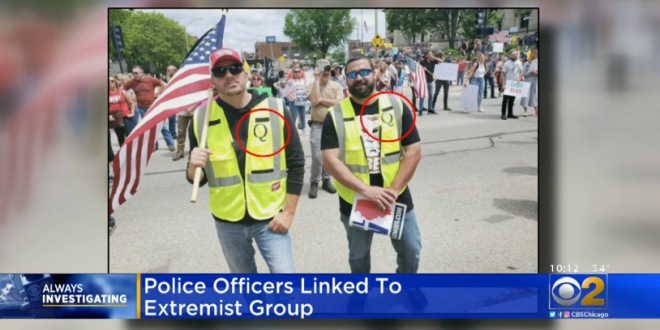 The men in the picture identify themselves online as Lasalle police officers Matthew Kunkel and Mark Manicki. Both officers say they attended the re-open Illinois rally in Springfield.

They were apparently off at duty at the time, wearing vests with the letter Q, which stands for QAnon. The Anti-Defamation League’s David Goldenberg describes QAnon as a far right extremist conspiracy theory.

“Driven largely by right wing extremists and also some supporters of President Trump,” said Goldenberg. Manicki’s social media is filled with conspiracy theories on everything from George Floyd’s death to the coronavirus.

The FBI labeled QAnon followers as a domestic terror threat last year after a number of incidents including a massacre at a Pennsylvania synagogue.

Previous Trump Claims People Will “Hold Up Mailmen” To Get Absentee Ballots, Also Print Them Out “Fraudulently”
Next CHATTER AWAY: Overnight Open Thread