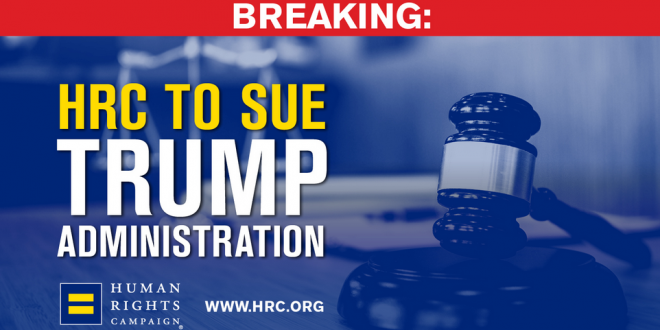 HRC To Sue Over Erased Protections For LGBTQ Patients

The Human Rights Campaign announced that it will file a lawsuit challenging the Trump-Pence administration’s decision to roll back critical civil rights protections in the rule implementing Section 1557 of the Affordable Care Act (ACA).

The new rule will eliminate explicit protections from discrimination based on sex stereotyping and gender identity that have existed under law, thereby sanctioning discrimination against LGBTQ people in health care programs and activities.

“We cannot and will not allow Donald Trump to continue attacking us. Today, the Human Rights Campaign is announcing plans to sue the Trump administration for exceeding their legal authority and attempting to remove basic health care protections from vulnerable communities including LGBTQ people.

And, to add insult to injury, the administration finalized this rule on the anniversary of the Pulse shooting, where a gunman killed 49 people in an LGBTQ nightclub,” said HRC President Alphonso David.